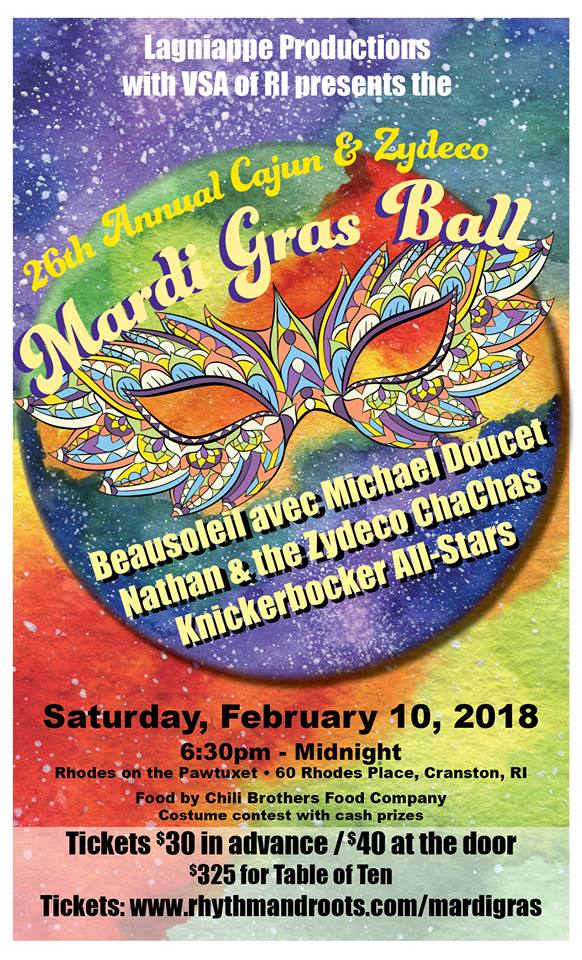 Lafayette, La.-based Beausoleil avec Michael Doucet has been one of the most esteemed Cajun groups in music since forming in 1975. BeauSoleil avec Michael Doucet take the rich Cajun traditions of Louisiana and artfully blend elements of zydeco, New Orleans jazz, Tex-Mex, country, blues and more. From The Grand Ole Opry to Newport Folk, from concert hall to dance floor, the music of BeauSoleil captivates audiences the world over. Michael Doucet sings and plays violin, guitar, accordion and mandolin.

Lagniappe Productions regrets to announce that Corey Ledet and his Zydeco Band will not be performing at the 25th Annual Mardi Gras Ball happening on this coming Saturday, February 25 at Rhodes on the Pawtuxet. Corey has sent us the following announcement:  “Due to an unforeseen personal family issue, I and my band will be unable to perform at the Mardi Gras Ball this year.  I am very sorry to disappoint all of my fans but I need to stick close to home for the time being until matters have been resolved.  I do hope to see you all in the near future though.”  As a result, we have adjusted the schedule accordingly to have a full night of great music.  Both Steve Riley & the Mamou Playboys and Roddie Romero & the Hub City All Stars have agreed to each play extended sets with plenty of Zydeco tunes included in their set lists. Be prepared for a lot of interplay between the two bands and an extended jam at the end of the evening.  The Hot Tamale Brass Band will kick off the evening’s festivities with a raucous set of high energy New Orleans Mardi Gras music. The evening’s schedule will be as follows:

Online ticket sales will end at 5:00pm on Friday, February 24th at www.rhythmandroots.com . Tickets are $30 in advance, $40 at the door and a limited number of reserved tables of ten are still available for $325.  Cajun and Creole food will be for sale from the beloved Chili Brothers and the bars will be serving when the doors open at 6:00pm. This is a costume optional Ball with prizes awarded to the winning singles, couples and groups.  Lodging is still available at the Comfort Inn, 1940 Post Road in Warwick RI for $79 per room per night.  Call today and ask for the Mardi Gras rate at 401-732-0470. See y’all on Saturday night!

Lagniappe Productions, producers of the annual Labor Day weekend Rhythm & Roots Festival in Charlestown, RI, bring back their authentic Louisiana Mardi Gras celebration held annually in southern New England. The Cajun & Zydeco Mardi Gras Ball returns for its 25th year at Rhodes on the Pawtuxet on Saturday, February 25, 2017 from 6:30 pm to midnight.  Featured bands include Steve Riley and the Mamou Playboys, Roddie Romero and the Hub City All Stars, and Corey Ledet and His Zydeco Band.

Roddie Romero and the Hub City All Stars

Corey Ledet and His Zydeco Band 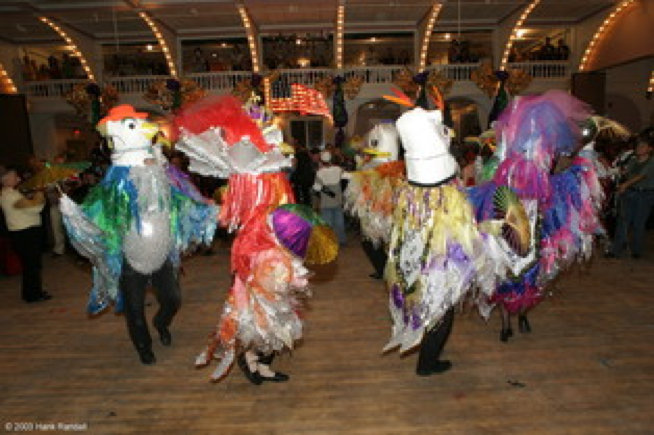 The ball features a costume contest with cash prizes in a variety of categories including best group, best couple, best individual and a Grand Prize of $250 for best overall costume.  There will be a cash bar and Cajun & Creole cuisine by Rhode Island’s renowned Chili Brothers Food Company – arguably the most popular food vendor at the Rhythm & Roots Festival every year, serving up their world-famous, Louisiana-Inspired Cuisine.

Steve Riley and the Mamou Playboys

Steve Riley and his Mamou Playboys returns to the Mardi Gras Ball by popular demand to make sweet Cajun music together. For 25 years they have played great Cajun music steeped in the French heritage of southwestern Louisiana and driven by accordion and fiddle. Matching their uncompromising respect for tradition with forward-looking vision Steve Riley and the Mamou Playboys have set the standard for modern Cajun music. Their musicianship, songwriting skills, harmony vocals and irresistible grooves mark them as one of the best bands to come out of South Louisiana.

Roddie Romero & the Hub City All Stars are nominated for 2 Grammy Awards in 2017. They have been performing worldwide at the most prestigious festivals and venues for over 20 years. This premier Louisiana band is celebrated not only for their authenticity when performing or recording traditional Cajun and Creole music indigenous to South Louisiana, but also for their original songwriting which stays true to Louisiana inspirations. They are notorious “Louisiana-Roots-Rockers” who put on an energetic show which is bound to make everyone get up and dance!

Corey Ledet and His Zydeko Band

Grammy- nominated Corey Ledet is a brilliant young accordion player who has learned his craft from studying the Creole Masters like Clifton Chenier, John Delafose, Boozoo Chavis and others. Corey has fused the styles of these masters into creating his own unique style of contemporary Creole & Zydeco music which enables him to please any audience.  Backed by a full band, Corey remains true to his roots and earnestly searches for ways to include them in his music. He keeps one foot firmly in the tradition while exploring surrounding influences in order to create the best of both worlds, and is able to infuse old and new styles of Zydeco into his own unique sound.